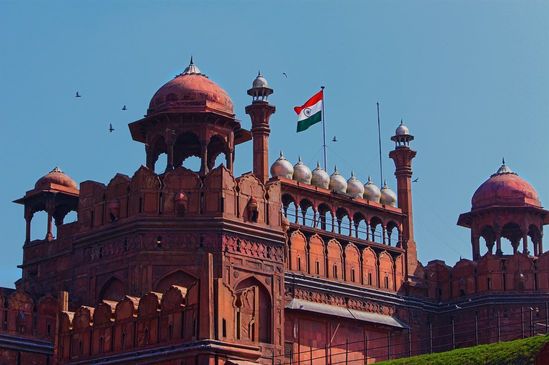 Day 1: Flight from USA to Delhi
Day 3: Arrive Delhi.
After completing immigration and custom formalities you will be met by your guide outside the baggage claim area and escorted to a waiting vehicle for your transfer to the hotel.
Delhi is made up of about 15 cities, spanning the period from the 11th to 20th centuries. There is little left of the early cities. Old Delhi (Shahjahanabad) and New Delhi, the two most recent cities and the heart of modern Delhi, are relatively intact. Mughal Emperor Shah Jehan in 1650 switched the Mughal capital from Agra to Delhi. Shah Jehan possessing an exquisite talent, especially in architecture, created the seventh city and in the process brought about Delhi's glorious renaissance. The Red Fort (Lal Qila) is Shah Jehan's symbol of power and elegance, built behind red sandstone walls. Its main gate (Lahore Gate) faces Chandni Chowk, the perpetually congested avenue heading west from the Red Fort, is filled with twisting lanes, small streets and crowded bazaars. If you peer through a portico you may see a man getting shaved, silver being weighed, or any other conceivable form of intense commerce.
In 1911 King George V announced the transfer of the capital from Calcutta to Delhi. The King's architects, Lutyens and Baker, set in motion the design and construction of Delhi's eighth city - New Delhi. Lutyens designed an "Imperial City" having palatial-sized buildings set amid broad tree-lined avenues punctuated by Moghul style gardens, complete with fountains and shallow pools. It took 20 years to complete this immense undertaking only to have the British pack up and relinquish the subcontinent in 1947.
Overnight at the hotel 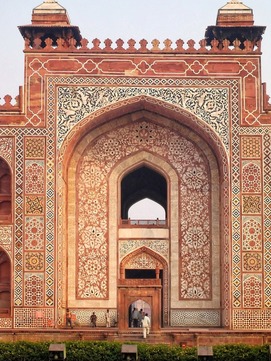 Day 4: DELHI
At 9:00 AM be ready in the lobby of the Hotel.
This morning visit Old Delhi, which is a striking contrast to New Delhi. Here are very narrow streets with unregulated traffic of all kinds (where might is always right). The Jama Masjid (Friday Mosque) opposite the Red Fort is the largest mosque in India and one of the greatest examples of the architectural extravaganza of the Mughal era.
Enjoy a brief stop at Raj Ghat -- Mahatma Gandhi's memorial in black marble.
Enjoy a rickshaw ride through Chandni Chowk (Silver Square), the main shopping street, and a legacy of the Mughal era.
Where you will see silver getting weighed, people walking around the road, an adventure in itself.
This afternoon visit New Delhi. Visit Qutub Minar - a tall tower, built to call the devout for prayer at an adjoining mosque. Then the India Gate (War Memorial) which is a 42 meter high stone arch and has names of 90,000 Indian soldiers who died in the first world war. Afterwards, the President's house, which is a huge building with 340 rooms in the middle of sprawling well, laid out gardens. The architecture here is purely British. Continue to Parliament House, Government Secretariat Buildings and Connaught Place shopping center.
Overnight at the hotel 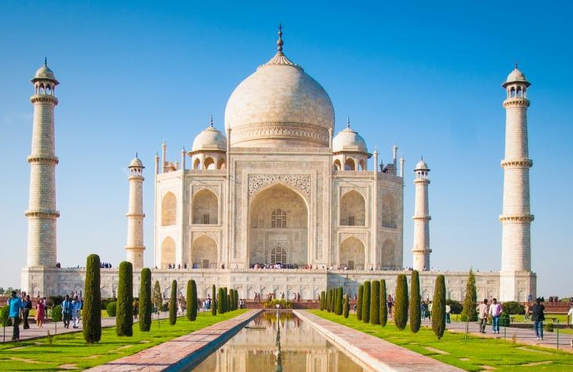 Day 5: DELHI - AGRA
At 7:00 AM be ready in the lobby of the hotel in preparation for your overland transfer to Agra. The drive takes approximately 4 hours. At the time of the Mughals, in the 16th & 17th centuries, Agra was the capital of the grand Mughal Empire. During this period the city became a leading center of art, science, commerce and culture. Akbar the Great made Agra great. The city's origins are dim but Akbar's grandfather Babur is credited with Agra's founding. In Agra, our representative will assists in your check in process at the hotel. Later in the afternoon visit the massive Agra Fort. From the fort enjoy awesome views of the Taj Mahal. The elegant buildings inside reflect an interesting synthesis of Hindu and Central Asian architectural styles -- a contrast to the unique Mughal style that emerged during this period. Explore the chambers of this royal residence. Shah Jahan was imprisoned here by his son Aurangzeb. The Shah spent his final years gazing at the tomb he had commissioned for his beloved wife Mumtaz Mahal. You will also visit itmad ud Daulah, the tomb of Mirza Ghiyath Beg. It was designed by his daughter, Nur Jahan, the most powerful woman in Moghul history. This evening set out to see the Taj in the evening light. One of the most photographed buildings in the world, the Taj still moves all visitors with its perfect proportions and exquisitely jeweled walls.
Overnight at the hotel

Day 6: AGRA - RANTHAMBHORE
At approximately 6:15 AM depart the hotel to visit the Taj Mahal during sunrise. The Taj Mahal is one of the most extravagant monuments in the world, built by an emperor in the found memory of his queen. Construction of the Taj Mahal began in 1631, and is believed to have taken 18 years to complete, with over 20,000 craftsmen working around the clock.
After breakfast begin your overland journey to Ranthambhore "the land of the tigers". The drive will take approximately 5 hours.
En-route visit Fatehpur Sikri (a hilltop ghost fortress and site of the mausoleum of Salim Chistis, a medieval Muslim saint). Make a wish at his tomb as it is said that he still grants the prayers of the pure-hearted. This abandoned capital of the Mughals is a perfectly preserved city at the height of the empire's splendor.
Ranthambhore is hailed as one of India’s finest wildlife destinations. Deemed a sanctuary after independence, Ranthambhore was granted park status in 1972, as part of Project Tiger. On your arrival at Ranthambhore, our representative will assist you in your hotel check in process.
Ranthambhore was the scene of royal hunting parties. Today, it is famous for its tigers and is one of the best places in the country to see these majestic predators in the wild. The tigers can be spotted quite often even during the day, busy in their normal pursuits.
Overnight at hotel 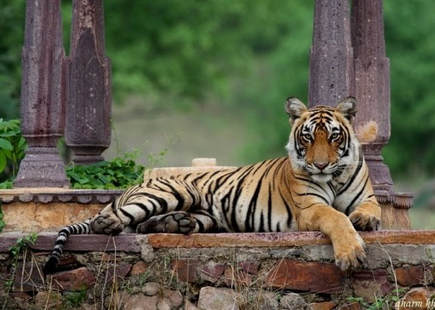 Day 7: RANTHAMBHORE
At 5:45 AM depart hotel and travel to the park for a morning viewing. The best time for sighting animals are early morning and late afternoon. Enjoy early morning 3 hrs Jungle safaris in a Sharing Jeep (a vehicle which is open on the top) enjoy the game viewing in the national park and back to the hotel.
The park is closed from 9:30 AM - 3:00 PM.
Midday will be at leisure to relax and enjoy the resort and the exotic surrounding.
At approximately 2:30 PM depart the hotel on an afternoon Jeep safari.
Overnight at hotel 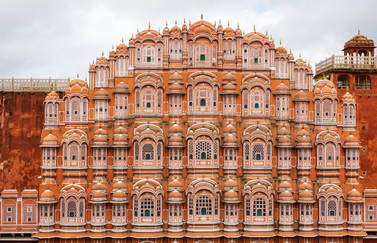 Day 8: RANTHAMBHORE - JAIPUR
At 5:45 AM depart hotel and travel to the park for a morning viewing.
At approximately 9:00 AM depart the hotel for Jaipur the land of the Rajahs. The drive takes approximately 5 hours.
Jaipur was the capital of Rajasthan province. Everywhere you will see the monuments of its Mughal rulers. Jaipur is one of the main centers for shopping in India -- especially with regard to textiles, jewelry, stones carpets, etc.
On your arrival at Jaipur, our representative will assist you in your hotel check in process.
Overnight at hotel 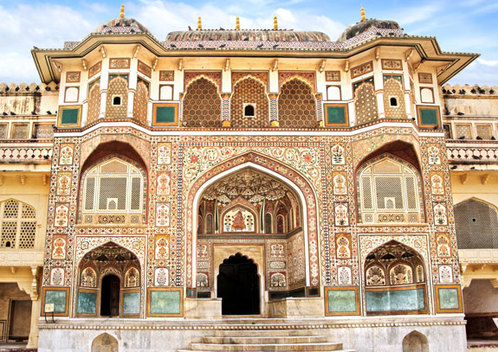 Day 9: JAIPUR
After breakfast at the hotel and get ready because it's time to explore and enjoy sightseeing in the Pink city of India - Jaipur.
Amber Fort, a magnificent example of a Rajput Fort building at its best. Fortified by hills and a succession of gates, the fort was a perfect capital for the Kuchwaha Rajputs from the 11th to the 18th centuries. The fort contains a dramatic Hall of Public Audience opposite a beautifully painted Ganesh pole. Ganesh, the elephant-headed son of Siva and Parvati, is commonly propitiated before beginning any new venture.
Visit the gardens and the marble rooms, which are cooled by pouring water through fine perforations in the center of the wall. This low-tech air conditioning was highly effective and easy to use. As you move between the rooms of this magnificent structure, you will feel the history and visualize the pomp and grandeur of a kingdom never conquered.
This afternoon visit the City Palace, home to an impressive collection of traditional Rajasthani and Mughal artwork, jewels, textiles and arms; Jantar Mantar; and the Hawa Mahal, or Palace of Winds, a tall facade of almost one thousand windows, behind which royal ladies once took the air in privacy.
Next to the City Palace is the Solar Observatory -- an astronomical treasure house with solar devices that give accurate predictions till date.
Overnight at hotel 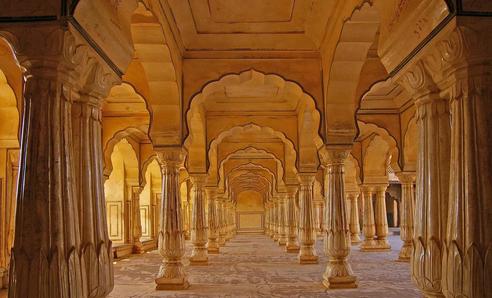 Day 10: JAIPUR - UDAIPUR
At approximately 6:30 AM be ready in the lobby of the hotel in preparation for your transfer to the Jaipur Airport.
8:35 AM Depart Jaipur via SpiceJet flight # 2623 direct service to Udaipur. Total flying time: 55 minutes.
9:30 AM Arrive Udaipur. After collecting your luggage you will be met outside the baggage claim area by your local driver and escorted to a waiting vehicle.
This afternoon you will have the opportunity to navigate the less-explored, hidden quarters of this romantic lakeside city. Your walk will take you to the famous Ghats and legendary Temples set along the banks of Lake Pichola prior to exploring the ancient step well once used by locals as a source of drinking water.
Throughout your heritage walk you will discover a variety of regional traditions and religious beliefs, as well as popular local legends whispered between inhabitants in hidden alleyways.
Uncover the diverse culture and craftsmanship that line each of the city’s beautiful streets; visit bustling bazaars where you can watch as the locals go about their daily lives; meet with local artisans engrossed with the creation of clay pottery, water pitchers, bamboo crafts and jewelry'
Overnight at hotel 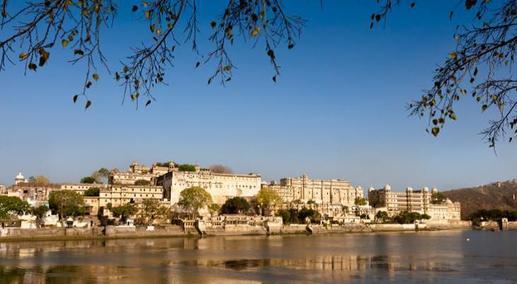 Day 11: UDAIPUR
At 9:00 AM be ready in the lobby of the Hotel.
This morning, set out on a boat ride on Lake Pichola (subject to water levels). There is no more delightful way to see this city. While boating in Lake Pichola, you will see the City Palace and its crenellated walls, draped gracefully along a high ridge. You will also see the Gangaur Ghat, where during the colorful Gangaur Festival, Rajasthani women offer prayers for a good husband.
Visit the City Palace, the largest palace complex in Rajasthan. Though it is a conglomeration of buildings built by successive rulers, it manages to retain a surprising uniformity of design and affords fine views of the lake and the city from upper terraces. Note the grandeur and intricacy that is displayed all over the gallery. Note the white filigreed balconies and windows, ornate arches and cupolas atop magnificent octagonal towers.
Visit the Crystal Gallery in the Fateh Prakash Palace. This amazing museum in Durbar Hall houses the world’s largest cut crystal collection, with ornaments, fountains, vases, crockery, furniture and beds.
Visit Jagadish temple which enshrines a black stone image of Lord Vishnu and his vehicle a might bird called Garuda in a brass image. The temple is a very fine example of Indo-Aryan art. The temple is still in use and is visited by colorfully dressed pilgrims.
Overnight at the hotel 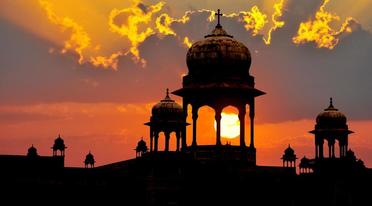 Day 12: UDAIPUR - DELHI
Enjoy this morning at Leisure.
At approximately 11:30 AM be ready in the lobby of the hotel in preparation for your transfer to the Udaipur Airport.
03:25 PM Depart Udaipur via Air India flight # 472 direct service to Delhi. Total flying time: 1 hour, 15minutes.
4:40 PM Arrive Delhi.
Day 13: Early morning flight to USA
Treasured memories of the wonderful sights, sounds and taste of Exotic India
TAKE ME TO THE INDIA HOME PAGE